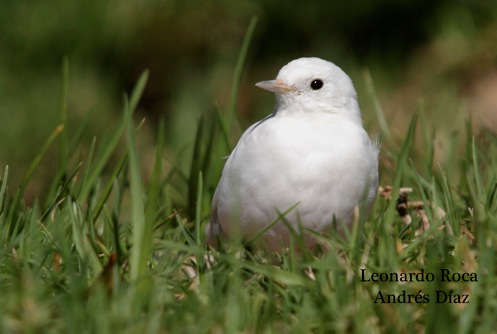 En castellano, bajo las imágenes Leonardo Roca found a completely white wagtail ( Motacilla alba presumably ssp alba ) on a journey between Benidorm and La Nucia , Alicante , by the third roundabout , on the lawn of the same roundabout along with other wagtains . The photos were taken on October 28, 2012 at 12:37 h . During September and October 2012 he saw the bird several times in the same place , but he could not photograph it. After taking the accompanying photos , and despite frequently visiting the area, the bird was not seen again ... The photos were taken from the car by Andres Diaz and Leonardo Roca . Although almost all white , the bird is not albino but a leucístic individual , since the eye is not red (therefore having some pigment and not being a true albino) . Such birds are being monitored in Britain by the BTO , and there is a page with more information on this plumage variations here . The British re
5 comentarios
Leer más
Más entradas