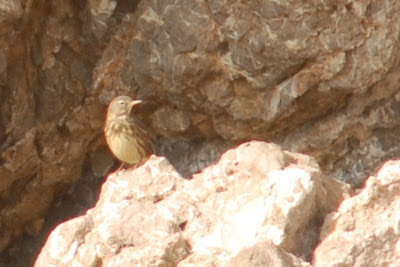 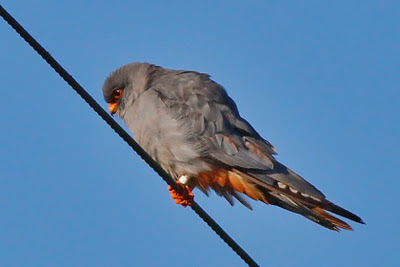 Falco vespertinus 2 w ♂ Véjer de la Frontera, Cádiz, 6.1.2012 (Stephen Daly) On 6th January 2012, 1500hrs. at Patria (near Vejer de La Frontera), Cadiz, Andalucía, Stephen Daly & Stephen Knapp saw and photographed a ringed 2w male (euring 7) Red-footed Falcon (Falco vespertinus). It is not only an overall scarce species in Spain but accidental in winter. Stephen Daly published an entry in his blog with photos of the bird and asked if any Spanish ringing program had been held. Indeed, according to the lastest data available on the whole of Spain, through official reports in the journal Ecología for 2007 , only three birds have been ringed from 1973-2007 in Spain, with two more in 2008 ( as explained in this blog ). No foreign recoveries had been reported for this species, a scarce migrant and sometimes irruptive species in Spain with over 200 individuals in 2008. So where the bird came from? Falco vespertinus 2w ♂ Véjer de la Frontera, Cádiz, 6.1.2012 (Stephen Daly
Publicar un comentario
Leer más
Más entradas