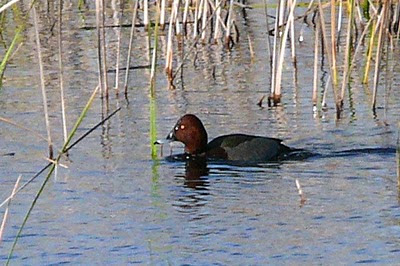 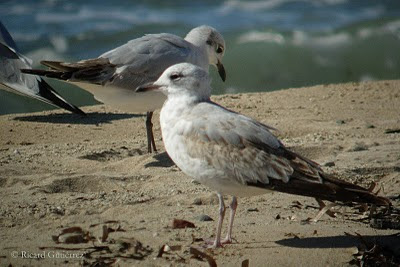 On 25.2.2011 while looking for PVC ringed gulls at Riera de Maspujols beach, N Cambrils, Tarragona, Catalunya, I saw what looked as an odd 1w Common Gull ( L.canus ). If I had not seen an hour before another L.canus at Sèquia de Vila-Seca area, Tarragona, perhaps I had thought this bird might have been just an odd one compared with the average Common gull. But I realised there wass something reminding me both Black-headed Gull ( L.ridibundus ) and Mediterranean Gull ( L.melanocephalus ) too. Despite size was larger than those of nearby ridibundus or melanocephalus , therefore OK for canus , the structure was not so compact as in canus should be. The head, besides, was clearly incorrect for the average canus , with a look clearly recalling the smaller gulls nearby. A number of shots, including one of the Vila-Seca 'pure' canus for comparison purposes are included below. So far, the option L.canus x melanocephalus is perhaps the most suitable, with the 'odd' La
Publicar un comentario
Leer más 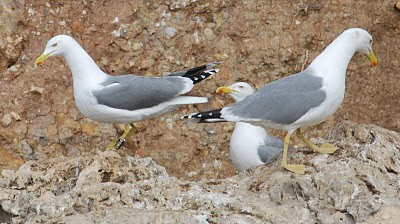 febrero 11, 2011
Larus delawarensis , Málaga 3.2.2011 © Adam Wilson Adam Wilson & Dominic Davidson saw a Ring-billed Gull ( Larus delawarensis ) at Guadalhorce river mouth, Málaga, on the 3rd of February 2011. In the report they sent to this blog and the rarities committe (despite the species is no longer a national rarity) they quote as follows: 'I picked up the bird preening and bathing at the edge of the river near the sea. I jogged within earshot of Dom, who was getting something from the car, and told him I had a Ring-billed Gull. We both then watched it for half an hour as it continued to bathe and preen. It was slightly bigger than the nearby Black-headed Gulls, and therefore clearly not one of the large white-headed gull species. The legs were pale green. The bill was broader than Common Gull. The basal two-thirds were yellow, sharply demarcated from the black distal part of the bill (almost a third), which was in turn sharply demarcated from the yellow tip. The bill wasn’t quit
Publicar un comentario
Leer más 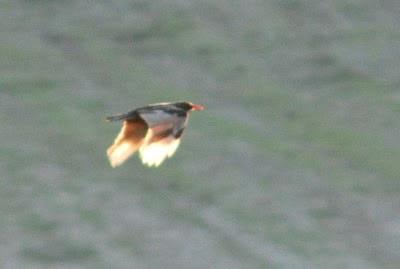 Leucistic Red-billed Chough ( P.pyrrhocorax ). Mas de Matxerri, Castelldans, Lleida. 4.2.2011 (© Ricard Gutiérrez) Alerted by fellow birdwatcher Sergi Sales who had been watching the bird along the week, on the 4th of February 2011 afternoon we payed a visit to the Mas de Melons nature reserve, an steppe area in S Lleida comarque of Garrigues. When heading to the Matxerri valley of such reserve, we saw a flock of >40 Red-billed Choughs ( Pyrrhocorax pyrrhocorax ) which were foraging in the area. One of them, near the main group but somewhat to the edge of it, was showing the characters Sergi had told us: large milk & coffee coloured wings with otherwise regular coloured bare parts and black body. An aberrantly coloured Chough. While approaching the flock, two Red-legged Partridges ( Alectoris rufa ) flushed and soon afterwards the choughs followed them. Only in-flight record shots could be obtained (Emma Guinart, Ricard Gutiérrez). Leucistic wing feathers included seconda
Publicar un comentario
Leer más 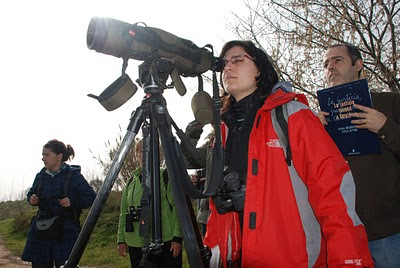